Theism is the metaphysical thesis according to which there exists a spirit (non-physical), present everywhere, the creator and sustainer of the universe, free, able to do everything (omnipotent), knowing everything (omniscient), perfectly good, a source of moral obligation, immutable, eternal, holy and worthy of worship.

This thesis has been, in one way or another, asserted and defended by metaphysicians and theologians, among whom are Augustine, Anselm, Thomas Aquinas, Duns Scotus, William of Ockham, Descartes, Leibniz, and more recently Brentano, Swinburne, Plantinga, Peter Van Inwagen, and many others to-day. All of them, again in one way or another, consider that theism is a rational thesis, which can be proven or at least defended by arguments whose validity is likely to be examined with clarity, rigor and precision, if necessary using formal (logical) tools. However, the rationality of theism has been highly questioned. It has been by believers, for whom it is not reason that ensures us that there is God with such or such attributes. There is thus an anti-rationalist tradition in the different monotheisms. Of course, Sceptics or Atheists also questioned the rationality of theism, claiming that metaphysical and theological claims are ill-grounded, if not contradictory. Religious belief has thus been relegated to an untouchable topic. As John Searle puts it :

Nowadays… it is considered in slightly bad taste to even raise the question of God’s existence. Matters of religion are like matters of sexual preference: they are not to be discussed in public, and even the abstract questions are discussed only by bores. (John Searle, Mind, Language and Society: Philosophy in the Real World, p. 34)

But it might be far from true that the question of religious belief (and sexual preference) is but a private matter or taste (if indeed matters of taste are private, as Searle seems to imply)?

The seminar will first inquire into whether it is appropriate to raise epistemological problems concerning theistic knowledge. Here is a list of questions that may be addressed by participants:

Is theism a metaphysical thesis or a religious claim? In both cases, what kind of justifications can be said to be relevant to its acceptance ?

Are not some divine attributes paradoxical (e.g. divine omnipotence defeated by the paradox of the stone)?

Is theism not only false but contradictory, in affirming the existence of a being whose metaphysical status is inconsistent?
At the very least, this seminar is intended to show that the epistemology of theism is not so boring, contrary to what Searle said. Theism is a lively theme in contemporary academic philosophy, and a quite significant concern in public philosophy outside the academic world. The current popularity of atheist literature, as well as the wave of books written in response to it, is a sign of the vibrancy of theism and of the inquiry on its epistemology. Despite the best efforts of atheists, it is not viable to dismiss theistic philosophy as unworthy of serious intellectual attention. Such attention is exactly the purpose of this seminar.

According to Anthony Kenny :

If there is no God, then God is incalculably the greatest single creation of the human imagination. No other creation of the imagination has been so fertile of ideas, so great an inspiration to philosophy, to literature, to painting, sculpture, architecture, and drama. Set beside the idea of God, the most original inventions of mathematicians and the most unforgettable characters in drama are minor products of the imagination: Hamlet and the square root of minus one pale into insignificance by comparison. (Faith and Philosophy, p. 59)

This is what the seminar intends to illustrate. This is a seminar. The organizers invite experts on the topic. There is no call for contribution. On the other hand, colleagues and students are invited to participate in the discussions we wish to provide.

For this purpose, guests will be invited to send a text a few weeks before the seminar, and will present only an abstract of their paper (20mn), followed by 40mn of discussion. Each participant will be asked to discuss more particularly one of the contributions. So in addition to his own contribution, he will have to prepare remarks and some questions about another contribution.

1:30-2:30 Roger Pouivet (Université de Lorraine, IUF) “McCabe on the Persons of the Trinity” 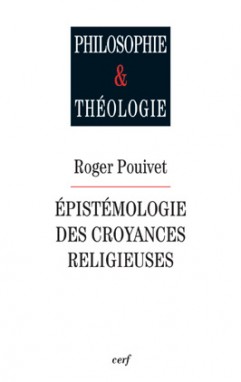 10:00-11:00 Winfried Löffler (University of Innsbrück) “Swinburne on the probability of God’s existence. A longitudinal study over the last 40 years”